Event: One Year On – Justice For Grenfell Solidarity March

Event: One Year On – Justice For Grenfell Solidarity March 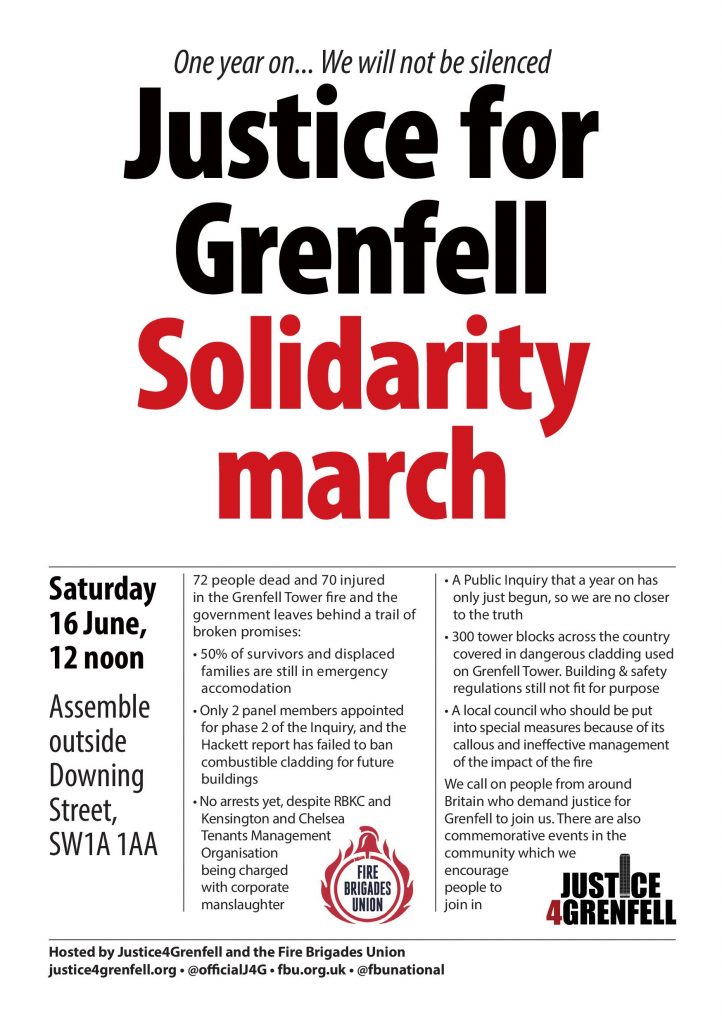 JUSTICE4GRENFELL AND THE LONDON FIRE BRIGADE’S UNION CALL ON PEOPLE FROM AROUND BRITAIN WHO DEMAND JUSTICE FOR GRENFELL TO JOIN US.

One year on and after 72 people have died and 70 injured in the Grenfell Tower fire the government leaves behind a trail of broken promises:

• 50% of survivors and displaced families are still in emergency accomodation
• No arrests yet, despite RBKC and Kensington and Chelsea Tenants Management Organisation being charged with corporate manslaughter
• A Public Inquiry that a year on has only just begun, so we are no closer to the truth
• 300 tower blocks across the country covered in dangerous cladding used on Grenfell Tower. Building & safety regulations still not fit for purpose. A flammable cladding, that is STILL not banned in the UK.
• A local council who should be put into special measures because of its callous and ineffective management of the impact of the fire

THERE ARE COMMEMORATIVE EVENTS IN THE COMMUNITY WHICH WE ENCOURAGE PEOPLE TO JOIN IN.

It has been announced that the long awaited Grenfell Tower Inquiry will be published on the 30th of October 2019 – the day before Brexit. A deliberate ploy resigning the......