Please click on the second line on icon below to view the Factsheet on the extension to Attorney General’s undertaking to The Grenfell Tower Inquiry in PDF form.

Please click on the icon below to view the Grenfell Environmental checks Community Update in PDF form.

Grenfell Environmental Checks: Community Update on Stage 2 and a message from the Chief Scientific Advisers

Please click on the icon below to view the Factsheet on the proposed extension to Attorney General’s undertaking to The Grenfell Tower Inquiry in PDF form.

Please click on the icon below to view the PDF.

Show your support for bereaved, survivors and community in their fight for justice!
Join us at the 2nd anniversary of the atrocity of the Grenfell Tower fire.
No deaths should be in vain! Where is the change, where is the justice?

Family reflections on Grenfell: No voice left unheard is an evidence based report filled with first-hand testimonies of bereaved families following a consultation day held by INQUEST (May 2019). 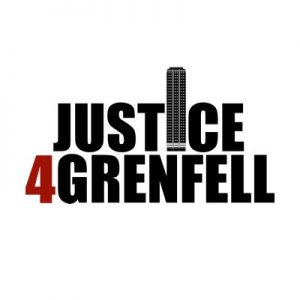 The publication of the Grenfell Tower Inquiry’s first report, which was due this spring, has been delayed until October.

The fire that devastated Grenfell tower and claimed at least 72 lives was a huge indication that ‘urgent and very far reaching reforms’ on a range of issues were required; from fire safety, social housing, inequality and deregulation to name a few. Grenfell Inquiry Judge Martin Moore-Bick has now stated that his much-awaited phase 1 report will be delay. The report was supposed to be delivered in spring 2019. Independent Charity INQUEST recently produced a report indicating that bereaved families demanded interim recommendations be put in place as soon as possible to protect others and a repeat of what happened at Grenfell.

The delay of the phase 1 report is an addition to list of other ‘delays’ communicated by the authorities.

Who can forget the Prime Ministers promise to Grenfell survivors that they would be rehoused with two weeks? In March 2019 the Met police stated that if their investigation conclude ‘there is sufficient evidence to consider criminal charges in relation to the fire’, a file will not be submitted to the Crown Prosecution Service for consideration until the final inquiry report that will follow Phase 2 hearings. Are we now to surmise that Phase 2 of the inquiry will also be subject to further delay?

Yes, Public Inquiry reports may well take a long time to write – but why make a promise about the timing of the report in the first place.  This has only served to decrease Bereaved, Survivors and Residents (BSR) confidence in the process further. They have already raised the issues of a lack of transparency during the inquiry and a culture of secrecy and exclusion.

This is another excuse on a long list of shifting the parameters of the inquiry and a lack of willingness to discuss with BSRs how and why decisions are made.

Nabil Choucair who lost 6 family members in the fire and Chair of Grenfell Trust said,

‘The delay of the Phase 1 report appears suspicious. ‘What are they hiding? Who are they protecting – the government, local authority, the companies? I now have a complete lack of trust in this process. There is a huge machinery of civil servants who are paid to produce the Inquiry report.  Why is it taking so long?’

In the lead up to the second anniversary we are approaching a very difficult time of the year for the whole community – we hope that the Inquiry will not bury more bad news or raise further delays at this time.

They should remember that Justice delayed is justice denied. 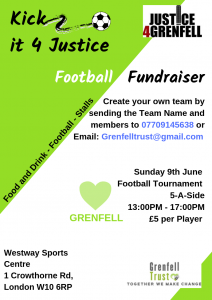 On the 9th of June 2019, Justice4Grenfell & Grenfell Trust will be hosting a fundraising football tournament event. If you would like to submit a team, Send the team name to 07709145638 or Email [email protected] . Influencers such as AJ tracey, Conducta, Ashley Walters, QPR will be attending with many more.

There are no upcoming events at this time.